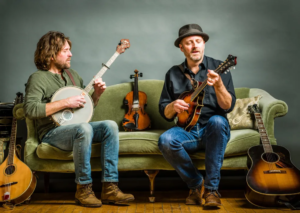 A vocal harmony duo fifteen years in the making, Moors & McCumber have done more than just endear themselves to fans - they’ve built a genuine community. Bridging the gap between classic folk rock and present day Americana, they write heartfelt songs directly inspired by life’s experiences. With their latest record, 2021’s ‘Survival,’ they have created some of their most compelling work to date.
The sound of Moors & McCumber is adventurous, eclectic, and endlessly creative. Borrowing from rock, pop, blues, folk, and world music, the two multi-instrumentalists defy common logic and embrace spontaneity to bring their stories and songs to life. Their strong vocal harmonies and unconventional instrumentation combine to create a mesmerizing experience. At the center of it all is their evocative songwriting.
Prior to the duo’s formation, James Moors, based in Wisconsin, and Kort McCumber, based in Colorado, each led prolific careers as solo artists. They had both already released six solo studio albums and had begun developing fanbases of their own. The two met at a music festival in 2005 and quickly bonded over their shared passions. James and Kort began performing together as something of a side project, but it immediately became apparent they were meant for much bigger things.
While “more than the sum of their parts” has become a bit of a cliche, there is no better phrase to describe Moors & McCumber. James is a gifted singer and songwriter, while Kort specializes in creating vocal harmonies and captivating arrangements through inventive instrumentation. With their voices combined, they create a truly special sound. As Grammy award-winning producer Lloyd Maines says, “They bring it all to the stage and deliver in a big way.”
One of the most notable things that separates them from the crowd is their “Moors & McCumber Adventures.” These music themed travel tours to international destinations such as Ireland, Scotland, and Mexico give fans an opportunity to directly engage with the artists while sharing cultural expeditions.
In October 2021, Moors & McCumber released their seventh full length studio album, ’Survival.’ Recorded at Blue Rock Studios in Wimberley, Texas and produced by Patrick Conway, this album features ten brand new songs showcasing the ever evolving talents of Moors & McCumber. Guest musicians include Patrick Conway, Dees Stribling, Erin Ivey, Katie Marie, Tom Delany, and The Fiddle Case.